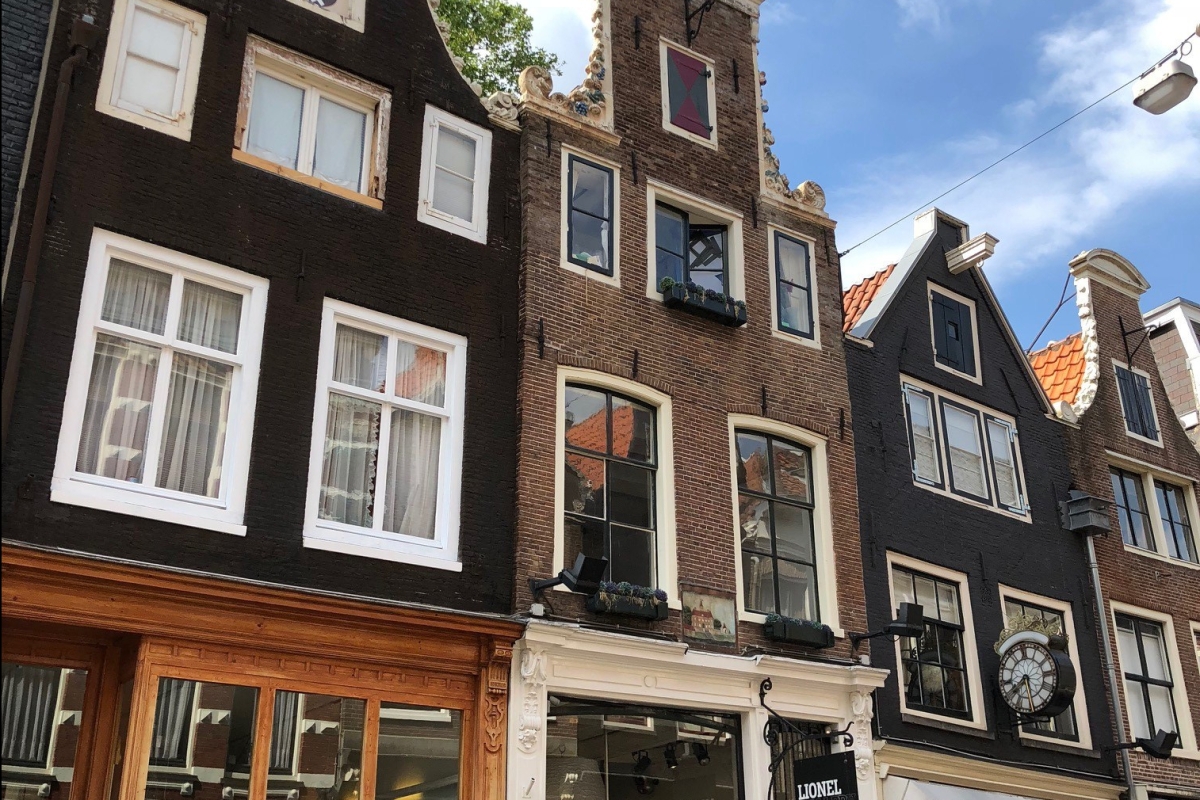 I could move to Amsterdam in a New York minute. After 30 years away, I was gobsmacked by the international flavors, sounds and sights of Holland’s grandest city.

The joys of Amsterdam are many. One of which is bitterballen, a Dutch snack similar to a croquette. I am happiest in a city where snack food and small plates abound. Port cities agree with me on a gut level, you might say.

On this trip to Amsterdam, my adult self waved back in sweet relief to my youthful self. I was no longer a naive twenty something, jumping off a train at Centraal Station to “experience” the allure of a place where one could legally smoke pot. I was now a mom with some miles behind her, and way, WAY over drugs of any kind.

Back in the ’80s, I backpacked around Europe with a college pal who insisted he wasn’t “grungy enough” to actually carry a backpack, shower infrequently and stay in hostels.

We both had some extra money in our pockets in the summer of 1987, so we bought matching black canvas Lucas duffels (cheap and roomy but NOT backpacks) and booked First Class train tickets for our jaunts through eight Northern European cities. We thought we were fancy, staying in basic B&Bs with their stale rolls and coffee while our friends “slummed it” at hostels in bunk beds – and no doubt had a lot more fun.

As I recall through the fog of bong hits and Space Cakes, I saw very little of the city apart from a quick blitz through the Rijksmuseum, a rainy tourist boat excursion and a walk through the Red Light District that left me feeling creeped out yet fascinated.

Predictably, I got paranoid and panicky from all the pot, and my travel companion had to steer me back through the canal streets to our B&B, where a very strict Dutch lady checked our eyes for any signs of drug use. She had yelled at us earlier that day when we checked in: “No drugs, no drinking! No bed for you if you use drugs!”

Somehow, I made it past her scrutiny and went to take a shower to try and shake off my stupor. The shower itself only added to my state of “high” anxiety. With its tall, white tiled walls and bleak fixtures with too many hoses, it felt like some sort of Dutch torture chamber. I couldn’t wait to leave Amsterdam.

This time around, however, I couldn’t get enough of the place. I arrived by air with my twenty-year-old daughter, who is (thankfully) smart enough to avoid pot, alcohol and the weird dorm drugs of the moment, like Adderall (prescribed for ADHD but currently being abused as a so-called “study drug”).

We promptly got on a bus headed in the wrong direction, AWAY from the city, and ended up in what I called the “west West Kendall” of Amsterdam. Like Miami, where West Kendall is located, Amsterdam is a very large, very flat city made up of many neighborhoods which are delightfully different from one another. Miami is larger than Amsterdam, by about a million people. This factoid surprised me.

5 things I love about Amsterdam:

1. Bitterballen:  A tasty Dutch snack of crispy fried balls filled with a gooey pot roast mixture. Served with grainy mustard, these could easily fortify you through an entire rainy Dutch winter.

2. Museumplein:  This lush, grassy park is the main square for three major museums in Amsterdam: the Rijksmuseum , the Stedelijk Museum of Modern Art and the Van Gogh Museum. Strolling through here on a bright sunny day with my art student daughter was one of the highlights of my trip.

3. De Pijp:  A hipster neighborhood with a shady park (Sarphatipark), a fabulous street market (Albert Cuypmarkt), fun boutiques and outdoor cafes. Next time I’m at Albert Cuypmarkt, I will NOT pass up the large cashmere throws I saw at the market for $69 each or the stunning hand-crafted Indonesian gold and green stone earrings for $35.

4. Oud West: Amsterdam’s “Old West” neighborhood was an accidental find thanks to aimlessly wandering the streets near Museumplein. We enjoyed restorative Thai massages at Nara Wellness – a gift from heaven for our tired tourist backs and feet! Oud West is full of home design stores, moderately priced cafes, beauty care boutiques and lots and lots of children speeding home from school on their bikes or being toted in little wagons behind their pedaling parents.

5 things my daughter loves about Amsterdam:

1. It’s Goth Friendly:  She could wear black lipstick in public without getting weird looks. (This was not the case in more conservative cities we visited later on our trip, like Bern, Switzerland.) She was thrilled to get the “Goth nod of approval” from a girl who looked exactly like Siouxsie Sioux from the ’80s group Siouxsie and the Banshees.

3. World Cup Craziness:  In the Leidseplein bar district near our Air BnB, we watched rowdy groups of Brits and Croats rooting for their home teams. “You just know they’ll all be ‘starfish drunk’ before the night is over,” quipped my daughter.

4. Cheap Dim Sum: We were both in raptures over the dumplings (and freshly brewed iced tea) at Dim Sum Now, located on Ferdinand Bolstraat.

5. Vintage Shopping: She loved browsing for vintage jeans and Moroccan leather hippie purses while David Bowie music played in the background at Marbles. We both enjoyed the slightly more upscale merchandise at Penny Lane.

My daughter asked if she could please add a “Number 6” to things she likes about Amsterdam. I said yes:

6. Death Grips will be playing at the Paradiso in September 2018.

6. Kwab:  A wavy and whimsical “ear-shaped” ornament style I knew nothing about until I visited the Rijksmuseum exhibit: KWAB: Dutch Design in the Age of Rembrandt. KWAB features stunning 17th century silver, furniture, prints, drawings and other objets. It’s not every day that you get to ogle a silver drinking vessel made by one of Rembrandt’s friends.